By far one of the most fascinating attractions of taking your vacations in Cancun is its ancient Mayan legacy with hundreds of archeological sites to be explored in and around the Yucatan Peninsula. Not many people are aware that Cancun itself is home to Mayan ruins with El Meco and El Rey among the most notable.

El Meco is the closest significant Mayan archeological site to Villa del Palmar Cancun and is famed for its mystical atmosphere and for being a potent energy center. As far back as the third century, the site of El Meco was populated by a fishing community and later became an important Mayan trading post for access to Isla Mujeres in the eleventh century. Thanks to its location, El Meco grew in population and developed as a religious center.

Visitors to El Meco, Cancun will be  impressed by the architectural arrangement of the site as well as its lush surroundings. You will find a ceremonial plaza and town center dominated by “El Castillo,” El Meco’s main building where there is also a small shrine for offerings. You can see the structural foundations of many smaller buildings imagining how they would have supported wooden roofs.

Guests at Villa del Palmar Cancun can enjoy an optional tour of El Meco organized by the resort’s Village Spa with a focus on learning about the mystical properties of this Mayan site in Cancun. The tour includes a guided walk around the ruins where you will learn about Mayan Cosmovision, listen to ancestral music and enjoy a peaceful mediation. There is also time for you to dedicate to silence, reconnecting with you inner essence to re-discover your life’s purpose. The ancient Maya believed that the site’s special energy and architecture will aid this ephemeral contact with your higher being. 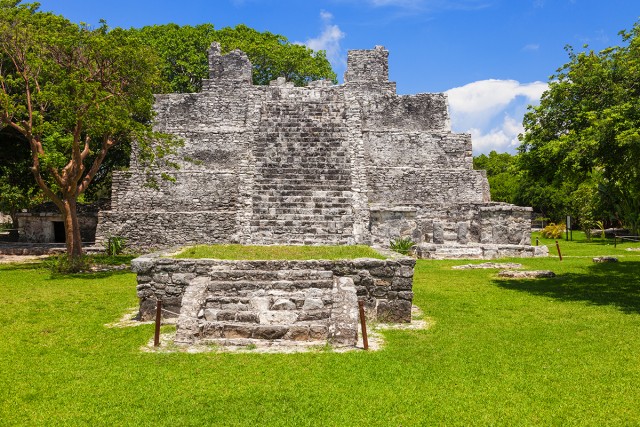